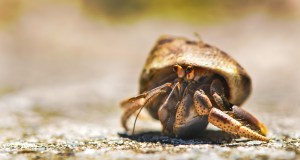 He was an active little sucker till the end. He was our own Houdini and will be missed (cough, wink).

I knew something was amiss when I let him and Bob out of their cage for their afternoon exercise. I found Earl’s leg but not attached to his body.

He was still moving around, so I just assumed that was normal (a stupid thing to do).

What Exactly IS Normal?

While the kids were at Martha’s house, I grabbed the cage to feed/water Earl and Bob. Well, I picked Earl up, and his other leg fell off.

Once again, I thought this was normal (I had never had crabs before).

I turned the shell over, and out came Earl, dead, smelly Earl.

In my sadness (insanity), I insisted that Big Daddy and I go to the ‘big’ town and get Peach another crab.

We did, his name is Ed, and he is still alive.

I’m redoing their terrarium and had them sitting on the kitchen table, and before I knew it, Bob fell off the table. Those little suckers can book it.

All in all, they are both alive for the time being.

We got both of these crabs while in Pigeon Forge, TN.

Which is not far from Gatlinburg.

Never will I ever assume anything about crabs or their body parts.