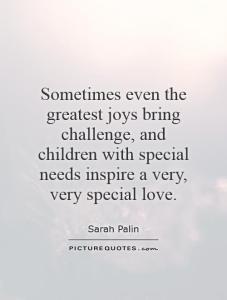 Gonna Kick Some Butt.  I almost used the “donkey” word cause that is how I feel right now.  Progress with OMS is slow….like a snail moving from Alaska to the Florida Keys kind of slow.  We have semi-okay days and then crap on a stick days.  Today has been a mixture of both.

He typically does not want to eat much and his OCD is off the charts.  He has to have every chair in place, every blanket in place, every shoe either in the shoe bucket or lined up, he has to touch every door and he chants the same sentence over and over and over and over and over and over (annoying, huh), and over again.  When we say to stop…..it’s almost like he can’t.  He hears me and he acknowledges that I’m speaking, but he can’t stop himself from doing all these things.  So, he usually ends up back in his bed, where the first rage of the day happens.  I got part of one videoed today.  It’s lovely.

Then there are moments when he is super sweet and loving.  He is almost completely potty trained (I think I’ll do another post on that topic).  He is doing great.  It is tough because he can’t stand still long enough to get his pants down and then when he bends over, he falls over, then he can’t get stable enough to get on the potty, then when he tries to get up the shakes and knocks the pee in the floor….then we have another production.  Still, he is almost potty trained and I view that as a score.

His therapy is tough on his little body.  He is usually sore and flustered for a few days after.  He is worse, muscle tone-wise than when he was assessed the first time a month ago.  We have a baseline and we ARE gonna move up….channeling those good thoughts.  Another score was his speech.  He speaks very choppily and staccato.  He loses his words or has to think about them and he gets, again, very flustered.  His SLP said that his articulation of words was that of a 5 yr 2 mth child!  Very exciting stuff.  She is going to treat his fluidity like she would a stroke patient because Opsoclonus Myoclonus Syndrome is neurological.  Pleased to hear he has good articulation, though.

We’ve had to up his sleep meds…and yes…they help his sleep and his behavior BUT he began itching incessantly.  It was pathetic.  Everything itched and when I would hold his hands to keep him from itching, he would rub his face on anything he could get ahold of.  We backed it back down and he isn’t sleeping as well, but he isn’t itching anymore either.  There is nothing more mind-numbing than when you have mosquito/flea bites or an allergic reaction and you cannot stop itching.

Tonight, we began our exercise routine.  My goal is 2x per day, with the incentive of outside play for a bit.  It is still really cold outside, so he cannot stay out for very long.  If I can get more in, I will, but it is all in how well his mind and body tolerate it.  We are doing ankle stretches, hip stretches, hip rotations, compression massages on his back, light massages on his bag and legs, bear crawls, sit-ups, push-ups, and crawling.  The goal is to get his core muscles more stable and to gain some strength.  We do not want regression we want progression.

I recently ordered his gait training walker and I ordered a weighted vest to wear so he can have some stability when he walks.  We also use hand weights and weighted utensils.  There is also this blue sticky stuff the OT gave us.  It is reusable and you put it on a surface and it sticks to that surface, then you put a plate/bowl/cup/toy on it and it stays in place to help from everything moving because of his ataxia.  We got a thing to hold a crayon/pencil in his hand and some sensory things to squeeze for his hands.  I want to be proactive because if I’m not….I’ll crawl up in a fetal position and cry.

I ain’t got no time for that.

Our Family, Friends, and Community

Little Lies Along the Way