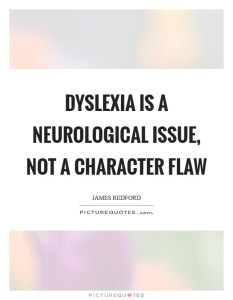 Things You May Not Know About Homeschooling A Child With Dyslexia

I was ELATED when we found out our child had dyslexia.  I mean, I giggled.  It was such a loud giggle that my child’s therapist thought I was fixing to have some sort of breakdown.  She even patted me, and I got a hearty “bless your heart.”

By the time my child was diagnosed, I had had this child in public preschool, homeschool, back to public school, and then when that crashed and burned, back to homeschooling.  I have homeschooled this child for the majority of his life, but I wanted to see if someone else could figure out what was wrong.

Luckily, our local university does specialized testing that does not cost me an arm and a leg.  Add that to the fact that his therapist (and all of the grad students) were beyond amazing with my child (and with me).

Getting tested was not a hard thing to do, once we got going.  We first had him tested for Central Auditory Processing Disorder (CapD).  That yielded the result of nothing was wrong, and his hearing was excellent.  No help, no answers.

We started therapy because I thought maybe it was depression or anxiety.  That was another plane flying into a mountain kind of moment.  It yielded no results.  Next, we tried medication for ADHD/ADD to see if that would spark something.  The meds did nothing.

It was an exhaustive list of things that we tried.  There was no amount of anything I could do or that I tried that helped him.  He was falling further and further behind, educationally, mentally, emotionally, and otherwise.

Once we got our appointment, at our local university, the therapist said she had to “score” the results.  That was when the back-patting began.  I asked her why she was patting my back and had a look of sympathy on her face.  She just smiled that sweet smile and kept on patting.

She said that she could not definitively tell me anything (until the scoring was done), but she knew within 5 minutes that he was SEVERELY dyslexic.

She and the grad students worked really hard with him.  He worked very hard, as well.  They did the Barton system with him, that did help.  He was “well enough” to leave intense therapy.

Since he has been out of therapy, life has been hard.  He is not progressing at an average rate, at all.  He struggles, at times, with even spelling his name.  Spelling, well that is a thing of the past.  I’ve finally yielded and bought him a spelling calculator.

We have the Dragon software, so he can “tell” stories instead of having to write them physically.  This does not help with his grammar, however…I feel like that could be a lost cause.

He does have an insatiable love of reading.  I am incredibly thankful for that aspect of his life.  He may skim over words that he doesn’t know, but he still reads.  He prefers the Encyclopedia on any type of war.

Other issues play into the delay that this child has, but I’m not going to go into them.  I just know that I hold onto a lot of the guilt for how behind he is.  It is not for lack of me holding him to a higher standard or for seeking outside help…it is just a mom’s guilt.

I know that I am not to blame for things his biological mom chose to do, while pregnant.  Logically, I know that, but still…I wanted to be able to fix it.  To make it better.  Help him learn.  See him thrive.

I almost feel like I’m 1/2 way up the mountain.  I’m not sliding down the mountain, and I’m not going upwards either.  A treadmill…I’m standing on a treadmill, going THROUGH the mountain.

Here’s to all the mama’s going through the mountain.  Cheers.

The More You Know