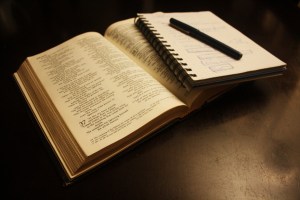 1 O my people, listen to my instructions.
Open your ears to what I am saying,
2     for I will speak to you in a parable.
I will teach you hidden lessons from our past—
3     stories we have heard and known,
stories our ancestors handed down to us.
4 We will not hide these truths from our children;
we will tell the next generation
about the glorious deeds of the Lord,
about his power and his mighty wonders.
5 For he issued his laws to Jacob;
he gave his instructions to Israel.
He commanded our ancestors
to teach them to their children,
6 so the next generation might know them—
even the children not yet born—
and they in turn will teach their own children.
7 So each generation should set its hope anew on God,
not forgetting his glorious miracles
and obeying his commands.

How many times have you told of the miracles that have been done in your life?  Whether you are telling a child, spouse, good friend, parent, co-worker…how many times?

Do you have those “aha” moments etched in your heart?  Are they written down so that you will not forget them?  I have this blog to look back on.  It is a hobby blog and makes zero money, but I know that I can have my kids read this and they will read some of those stories.

Other stories or moments, I have written in Bibles.  Then, if it is a big event…I will buy or am given a little sign and on the back, I write the miracle, date it, and tape it to the back of that object.  Some I have displayed around my house (though I’m not a trinket kind of gal).  Others, I have tucked away and labeled.

I challenge you to pray for the Lord to reveal those moments.  When He does, write them down and talk about them.  Let others see the miracle in you!

8 Then they will not be like their ancestors—
stubborn, rebellious, and unfaithful,
refusing to give their hearts to God.

9 The warriors of Ephraim, though armed with bows,
turned their backs and fled on the day of battle.
10 They did not keep God’s covenant
and refused to live by his instructions.
11 They forgot what he had done—
the great wonders he had shown them,
12 the miracles he did for their ancestors
on the plain of Zoan in the land of Egypt.

13 For he divided the sea and led them through,
making the water stand up like walls!
14 In the daytime he led them by a cloud,
and all night by a pillar of fire.
15 He split open the rocks in the wilderness
to give them water, as from a gushing spring.
16 He made streams pour from the rock,
making the waters flow down like a river!

Can you even imagine?  I certainly cannot!

17 Yet they kept on sinning against him,
rebelling against the Most High in the desert.
18 They stubbornly tested God in their hearts,
demanding the foods they craved.
19 They even spoke against God himself, saying,
“God can’t give us food in the wilderness.
20 Yes, he can strike a rock so water gushes out,
but he can’t give his people bread and meat.”
21 When the Lord heard them, he was furious.
The fire of his wrath burned against Jacob.
Yes, his anger rose against Israel,
22 for they did not believe God
or trust him to care for them.

23 But he commanded the skies to open;
he opened the doors of heaven.
24 He rained down manna for them to eat;
he gave them bread from heaven.
25 They ate the food of angels!
God gave them all they could hold.
26 He released the east wind in the heavens
and guided the south wind by his mighty power.
27 He rained down meat as thick as dust—
birds as plentiful as the sand on the seashore!
28 He caused the birds to fall within their camp
and all around their tents.
29 The people ate their fill.
He gave them what they craved.

As a parent…we get angry at our children.  God certainly was angry at His children.  They moaned and groaned and He had had enough!

He met their needs in an overwhelming way.

He also disciplined His children for the way they were behaving and so ungrateful.  As parents, we are called to discipline our kids.  Clearly, we aren’t called to kill the strongest of our kids, yet we are still called to not “spare the rod.”

Remember, all kids are different and all should be parented differently!  “Typical” kids may respond to “traditional” discipline.  Yet, there are other kids who do not respond well to that.  The more you discipline in a cookie-cutter fashion, the less they respond or the more obstinate they will become.

Think outside of the “traditional” mold of discipline.  Do so according to your individual child(ren).  My kids respond better when I whisper than when I yell.  Though yelling sometimes feels better for me!  Some kids respond to privileges being taken away, for some restitution.  Others, however, respond to physical labor (working extra, running, etc).  Yet others could respond to the traditional spanking.

Try not to shame your child and do not discipline when you are angry.  Calm down, take a breath, say a prayer until you can calmly discuss and properly discipline your children.

30 But before they satisfied their craving,
while the meat was yet in their mouths,
31 the anger of God rose against them,
and he killed their strongest men.
He struck down the finest of Israel’s young men.

32 But in spite of this, the people kept sinning.
Despite his wonders, they refused to trust him.
33 So he ended their lives in failure,
their years in terror.
34 When God began killing them,
they finally sought him.
They repented and took God seriously.

35 Then they remembered that God was their rock,
that God Most High was their redeemer.
36 But all they gave him was lip service;
they lied to him with their tongues.
37 Their hearts were not loyal to him.
They did not keep his covenant.
38 Yet he was merciful and forgave their sins
and did not destroy them all.
Many times he held back his anger
and did not unleash his fury!
39 For he remembered that they were merely mortal,
gone like a breath of wind that never returns.

God was their rock.

They gave Him lip service.

Were not loyal to Him.

Did not keep their covenant.

He forgave their sins.

Did not destroy them.

Held back His anger.

We are but a breath in the wind.

40 Oh, how often they rebelled against him in the wilderness
and grieved his heart in that dry wasteland.
41 Again and again they tested God’s patience
and provoked the Holy One of Israel.
42 They did not remember his power
and how he rescued them from their enemies.
43 They did not remember his miraculous signs in Egypt,
his wonders on the plain of Zoan.
44 For he turned their rivers into blood,
so no one could drink from the streams.
45 He sent vast swarms of flies to consume them
and hordes of frogs to ruin them.

46 He gave their crops to caterpillars;
their harvest was consumed by locusts.
47 He destroyed their grapevines with hail
and shattered their sycamore-figs with sleet.
48 He abandoned their cattle to the hail,
their livestock to bolts of lightning.
49 He loosed on them his fierce anger—
all his fury, rage, and hostility.
He dispatched against them
a band of destroying angels.
50 He turned his anger against them;
he did not spare the Egyptians’ lives
but ravaged them with the plague.
51 He killed the oldest son in each Egyptian family,
the flower of youth throughout the land of Egypt.

52 But he led his own people like a flock of sheep,
guiding them safely through the wilderness.
53 He kept them safe so they were not afraid;
but the sea covered their enemies.
54 He brought them to the border of his holy land,
to this land of hills he had won for them.
55 He drove out the nations before them;
he gave them their inheritance by lot.
He settled the tribes of Israel into their homes.

56 But they kept testing and rebelling against God Most High.
They did not obey his laws.
57 They turned back and were as faithless as their parents.
They were as undependable as a crooked bow.
58 They angered God by building shrines to other gods;
they made him jealous with their idols.
59 When God heard them, he was very angry,
and he completely rejected Israel.
60 Then he abandoned his dwelling at Shiloh,
the Tabernacle where he had lived among the people.
61 He allowed the Ark of his might to be captured;
he surrendered his glory into enemy hands.
62 He gave his people over to be butchered by the sword,
because he was so angry with his own people—his special possession.

63 Their young men were killed by fire;
their young women died before singing their wedding songs.
64 Their priests were slaughtered,
and their widows could not mourn their deaths.

65 Then the Lord rose up as though waking from sleep,
like a warrior aroused from a drunken stupor.
66 He routed his enemies
and sent them to eternal shame.
67 But he rejected Joseph’s descendants;
he did not choose the tribe of Ephraim.
68 He chose instead the tribe of Judah,
and Mount Zion, which he loved.
69 There he built his sanctuary as high as the heavens,
as solid and enduring as the earth.
70 He chose his servant David,
calling him from the sheep pens.
71 He took David from tending the ewes and lambs
and made him the shepherd of Jacob’s descendants—
God’s own people, Israel.
72 He cared for them with a true heart
and led them with skillful hands.

All About Single-Sided Deafness