Sadness in America and the Celebration of New Year in Ethiopia

Today, September 11, 2020, is a hard, yet beautiful day.  There is Sadness in America and yet the Celebration of New Year in Ethiopia.  When you are raising a son, from this beautiful country, you want to celebrate their traditions. This helps him understand and honor his culture.  Yet, as an American, this day is extremely difficult.  The difficulty is due to the attacks on our country.

These terrorist attacks are known as 9/11.  This day will never be forgotten.

On Tuesday morning of September 11, 2001, at 8:45 AM, the United States suffered a terrorist attack.  An American Airlines Boeing 767 filled with 20,000 gallons of jet fuel crashed into the north tower of the World Trade Center in New York City.

The fourth jet was to target the United States Capitol Building in Washington, D.C. Instead, the plane crashed in a field in Pennsylvania.  Amazingly, the passengers on the flight fought against the hijackers to regain control of the plane.

Tower Two of the World Trade Center collapsed at about 10:00 AM. At 10:30 AM, Tower One also collapsed.  The attacks resulted in the deaths of 2,977 people.  The victims included 246 passengers and crew on the four planes.  Sadly, 2,606 in New York City, both in the towers and on the ground.  Also, 125 individuals at the Pentagon.  Men, women, and children from more than 90 countries died in these attacks.

The 19 terrorist hijackers also died in the attacks. The hijackers were Islamic terrorists from Saudi Arabia.  Furthermore, several other Arab nations reportedly backed financially.  Saudi fugitive Osama bin Laden and his al-Qaeda network did this.

In 2004, Osama bin Laden, the leader of al-Qaeda, claimed responsibility for the attacks. Al-Qaeda and bin Laden cited U.S. support of Israel, the presence of U.S. troops in Saudi Arabia, and sanctions against Iraq as reasons for the attacks. 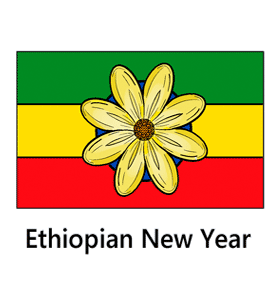 The Celebration of the New Year

As a harbinger of the New Year (Enkutatash), a song called ‘Abebayehosh‘ is performed by groups of Ethiopian girls. You could be at home in your PJs, sipping on some coffee, or maybe taking a stroll.  Then, a group of girls might approach you beating their drums, clapping, and singing the traditional song.

The Ethiopian Calendar is seven to eight years behind the Gregorian calendar. Interestingly, Ethiopia’s New Year (Enkutatash) means the “gift of jewels”.