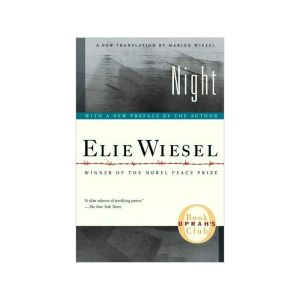 Gracious, this book, Night by Elie Wiesel, is one I struggle with reading but love. It is a simple read, and it is not very long. But. Just but. It is packed with horror, devotion, beauty, fear, and survival.

Elie’s story is so heart-wrenching. The thought of my son, who is now at the age Elie was when he was taken to the concentration camp at Auschwitz, makes my heart sink. You read about the ebbs and flows of his physical and mental state. The devotion to his father and the yearning for his mother’s hands on his face is palpable. He kept a picture of his sister, Tzipora, etched in his mind.

He endured massive amounts of physical trauma, yet the parts that stand out to me are the prisoners who were hanged. It wasn’t enough for the SS officers to shoot them. They had to hang them, as well. To them, it didn’t matter if it was a man, woman, or child. I cannot imagine the images that were burned in his head.

How Does One Survive?

Seriously, how did he survive? Starvation. Malnutrition. Lice. Issues with his feet. The beatings. Watching his beloved father be beaten. He was listening to his dad die and wondering what kind of God would allow this horror. That is what the Holocaust was. The Holocaust was a horror that occurred in this world. All because someone is Jewish, they were hated.

How does one man, Hitler, have such a deep hatred for the Jews? Honestly, how did he come to such power to have so much influence to create such chaos? I will never know, but I can certainly pray that it will never repeat itself.

We have been to the Holocaust Museum in DC, and for as many people there, you could hear a pin drop. No one spoke at all. People calmly and quietly filed through the room after room, just taking it all in. We will never know the magnitude of the sites, smells, and events because we were not there. Yet, this museum honors the people who suffered and died with walls upon walls of pictures.

Night is a book that everyone should read. Also, The Tattooist of Auschwitz and The Hiding Place.  Anne Frank is a good book, though I have not read it in years. That may be my next one! By reading these books, you are supporting the authors and their families. It also gives you a better understanding of racism and hates at its core.