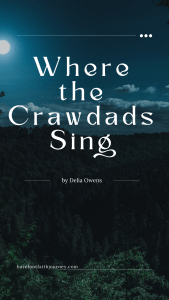 Where the Crawdads Sing

Where the Crawdads Sing is by Delia Clark. “For Years, rumors of the ‘Marsh Girl’ have haunted Barkley Cove, a quiet town on the North Carolina coast. So, in late 1969, when handsome Chase Andrews is found dead, the locals immediately suspect Kya Clark, the so-called Marsh Girl. But Kya is not what they say. Sensitive and intelligent, she has survived for years along in the marsh that she calls home, finding friends in the gulls and lessons in the sand. Then the time comes when she yearns to be touched and loved. When two young men from a town become intrigued by her wild beauty, Kya opens herself to a new life- until the unthinkable happens.”

Introduction to this Book

I had heard of this book, but it never really sparked an interest in me. Fiction is not my thing, but I have been reading some heavy topics that have weighed my brain down. Also, I want to note that my favorite book is To Kill a Mockingbird. I love the book, play, and movie. So, it is hard to say I dislike all fiction. It just isn’t my go-to reading material.

Well, one day, my oldest and dearest friend found a day we could spend together without interruptions. Alone. Just her and I. Alone. Together. Untamed in the wilds of our small town. We decided to be rebels and go to a movie at 9:45 in the morning. There were several reasons, mainly because I had to haul a child from here to there to yonder.

We could slip in a movie and maybe lunch before having to do some mundane parenting thing. Susan wanted to watch Elvis (superb), but it was going to run too late. I suggested Maverick (I liked it the first time and would go again), but she had already seen it. So, she suggested this movie.

Thoughts on the Movie

The lead actress, Daisy Edgar-Jones, was spectacular. Most of the characters in the movie I did not recognize from previous films. David Strathairn played her attorney. You might recognize him from The Bourne Ultimatum and We Are Marshall and the Firm. Garret Dillahunt played her Pa from Raising Hope (he was in other movies/shows, that is just the one I’ve seen him in). The rest of the cast is unknown to me. The actress who plays Kya was phenomenal. The book captured her essence, and the movie followed through with the casting.

Some parts of the movie were triggering and hard to watch if you come from a place of trauma. It was difficult to watch some of the scenes. The scenes had excellent execution, just brutal. We thoroughly enjoyed the movie, and I would see it again, especially now that I’ve read the book.

After the movie, I ordered the book. It is a similar read to the book To Kill a Mockingbird, so that part was okay for me. It did walk hand in hand with the movie, with few exceptions. There were some scenes in the film that, in the book, were placed in a different timeline.

Overall, the book falls very close to the movie. Of course, books have a plethora of information, allowing the author to expound on a specific situation. The author dove more into details that the movie could have benefited from though it would have made the movie 10 hours long (worth it.)

This book was excellent for a girl who isn’t a fiction fan! I wish I knew someone to talk to it about this book which had also seen the movie. I did call my daughter at 10:30 at night, telling her I had finished and ranting over one minor detail. Well, minor to her, to me, it was a ‘What in the Sam Hill just happened” moment.

Processing After the Read

I was so worked up after I finished (I should never start/finish a book in a day) I was exhausted. Seriously, Weight Watchers can go out the window, and I want another coke. I needed to munch on something, take a nap, take a shower, or cry. My feelings were all over the place.

Good book. Worth the read. Watch the movie.