On our 20th Anniversary Trip Day 8, we went to the Mansfield Reformatory.

It was WOW and WOW.

I have lots of pictures.

The thought of how many young men died in this prison was mindboggling.  Bart’s dad played baseball with the inmates on this front lawn.  How cool is that?  Oh, how I wish he were alive so we could share this with him.  I would love to hear all of his stories.

The new prison is beside the old one.  We accidentally got into the parking lot of the wrong prison.  I guess the no trespassing sign should have been cue.  Honestly, we looked up and saw the line of prisoners walking from the yard back to their cells.  We left quickly.

There, we met up with his aunt and uncle.  They were gracious enough to let us stay with them overnight.  They took us out to a cool little diner.

We left the diner and headed to the campground where I got to meet another aunt and uncle (after 20 years of marriage).

We stayed and chatted for a while and then headed back to the house to sleep. 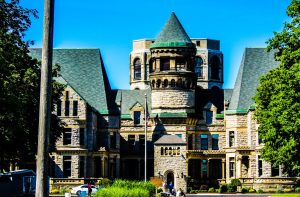 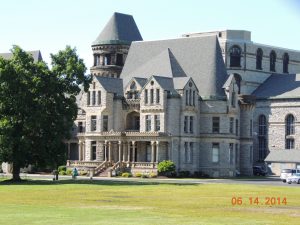