Hard Week Leading Up to Christmas

Today is only Tuesday night and this week has already completely caused a mental, physical, and emotional breakdown.  A dear friend passed away and in my grief for his family, I went through the motions of the day.  I hauled kids back and forth to work and school.  The house was clean, appointments made, dinners planned, and then I was alone.

I found myself at Hobby Lobby and that is not a good place to be when you are having a moment.  There are moments where you are listening to Christmas music and then there are the old time hymns that my friend loved.  I kept my mask on because my tears were flowing and I was trying to hide the ugly cry.

As I was pondering the things that kept appearing in my cart, I called to talk to one of my son-in-laws.  I needed some advice on something and he found out I was, indeed, at Hobby Lobby.  The excitement in his voice was palpable.  I was in the throes of hysteria and he was thrilled I was in the store.

I told him that there was something in there that I was going to get for Apollo but I wasn’t sure about it.  He assured me that Apollo needed whatever it was that I had picked out.  Everything in Hobby Lobby is good and safe to purchase, including the shopping cart.

As we are discussing what I have and what I actually needed him for, this object caught my eye and I lost it.  I stated that I had just found a hot pink flamingo with a crown and that I didn’t need it but I wanted it.  That everyone needs a crown every now and then.  It was only $12 but it wasn’t on sale.

He was THRILLED and said that I, of course, needed it.  That it would be awesome to have and it was okay that I buy it because it is from Hobby Lobby. I put it in my cart and cried when I handed it to the cashier.  I told her I didn’t need it and she thought I made a great purchase.

As I was leaving, I ran into an old acquaintance who I grew up with.  Our families were good friends and we were always together when we were young.  I knew her dad had had Alzheimer’s and was not well.  Also, her mom, amazingly, was his sole caregiver.

I was shocked to see her after 30 years and asked if she moved back to town.  That is when she told me that she was only in because…her dad just died…I was speechless.  After the loss of my friend that morning and now the loss of someone that I truly loved and respected as a child was gone.  It was a good thing, he is with Jesus and singing his sweet heart out but still.  It is hard for those left behind.

We chatted and caught up a bit and then we parted again.  I called my Oak and cried all the way home.  I walked in the door and just laid on Bart sobbing.  He is a good man.  He knew my one friend but didn’t know or meet my other friend, Buddy.  He just let me cry.

I got out my purchases to show Bart.  I told him that we were officially done with Christmas.  Then, I got to the bag with my flamingo.  Through my sobs, I told him I could take it back because I didn’t need it and didn’t want to waste his money on something so frivolous.  He told me that he loved it and I could keep it.  It isn’t that big of a deal and it made me happy.  I told him that Arkie encouraged me to buy it because it was from Hobby Lobby (his love of this store warms my heart.)

So, meet my pink friend… 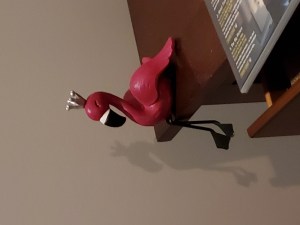 There have been other things that are really really tough that have happened.  Prayers are truly appreciated for the families that lost loved ones this week, for those affected by the tornadoes, for those who are lost, and for my daughter whom we miss and is not with us this year.

God is good.  I will love Him through this storm.  I just have to keep my eyes above the waves.  This week, I have sort of felt like I was drowning.  This too shall pass…like a kidney stone.

Christmas Baking with my Oak

The Body Keeps the Score