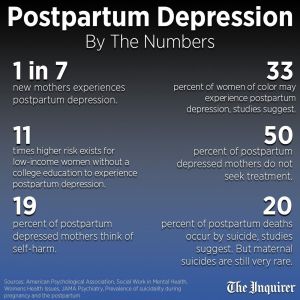 Postpartum Depression and Suicide are real things. The girls’ first 14 months of life were traumatizing for me as their mom. They had several health issues such as Intrauterine Growth Restriction, Small For Gestational Age, Failure To Thrive, and many other things. On the day of my 30th birthday, things took a turn. The girls were seven months old. I hadn’t heard from hardly anyone that day. I felt everyone had forgotten this birthday—honestly, even my husband. I didn’t hear from him until NOON.

That is when Postpartum Depression and Suicide collided. On the way home that day, from running some errands, I had hit my lowest point. I was going to end it. I had it all planned out. Then, there was a moment when I heard babble. It was one of my sweet girls reminding me they were still here. It was God reminding me that He wasn’t done with me yet.

The next day, I spoke to a friend, and she gave me the name of her therapist. I called her and began my therapy. Therapy taught me so much about myself. I learned that grief came in many forms and looked different for everyone. I learned that the grief from losing Grandaddy and the trauma from the girls had all added up. I was suffering from Postpartum Depression (PPD). I did not get any medication because therapy was enough for me. I began to deal with my grief and even issues from my childhood that had gone unresolved.

When the girls were 14 months old, I unexpectedly found out I was expecting again. We also got a diagnosis for our girls at this time (just before finding out about our pregnancy). I was so scared of PPD again, but I knew I could get through it. I did well. We had a healthy boy with no IUGR (though he did have a heart defect that resolved on its own by six months of age). I first felt him kick about 16 weeks into my pregnancy. Would you like to guess what was on the radio when this happened?

I had a little of the “baby blues” with hormones balancing back out, but I did okay. We went on to have another unexpected pregnancy that took a turn for complications at 26 weeks and again at 31 weeks. I didn’t feel him kick until about 19 weeks into my pregnancy, which scared me. Grandaddy’s song came on the radio while I was driving down the road, and I felt it. This little kick reassured me. It was his favorite song to kick as well. I had been worried about it but was told I had an anterior placenta, so that could be normal. Our sweet baby was delivered and was, again, IUGR, and the diagnosis was missed.

Things went on, and life got complicated for a while. After a few months, I messaged my OB and my old therapist and told them I was NOT okay. My old therapist said that meds might be a good idea. My OB called me with a prescription. I also started the process to begin therapy again (and then COVID happened and put a wrench in THAT!).

It has been four years since that day when I thought it was all over. Two more babies have been born with our youngest, over a year old. I still think about Grandaddy every day. All of my babies know who he is and can identify him in pictures. They talk about him when they ask questions. My girls have discovered grapefruit, and one likes it. I told her that Grandaddy also loved it, so she brags about that. In so many things, I see him. I know he has truly been watching over us.

All Four of my Kids Still Love that Song

They will dance and “sing” to it. Life isn’t perfect, but I have weaned off of my anti-depressant now. Every day isn’t great, as our girls are special needs and require more care. Two days before my 34th birthday, I ended my relationship with my narcissistic mom. My 34th birthday came and went with no drama. That day was filled with peace.

PPD and other postpartum-related illnesses affect so many. The day I turned 30, I didn’t know I was struggling with it, but I did see that I couldn’t go on. There is treatment available, and there is help. The help that will not judge you and the assistance that will support you and help you through. Please, please know that you are not alone and you are not at fault. You are strong, and you are a warrior. You can do this, and you can survive. I have battle scars, but I have fought hard, and they show that. Those scars show the fight. They remind me where I have been and that God is not done with me yet.