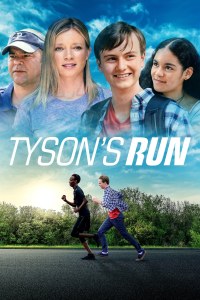 Here is a brand new review and giveaway from the Momentum Influencer Network.

Don’t miss this feel-good story of faith, courage, grit, and unlikely alliances for a teen on the autism spectrum. You will come away inspired! Have you ever found yourself trying to get the approval of a parent? If not, you likely know someone who has. That’s where Tyson, a teen with autism, finds himself as he watches his hero father lead the high school football team. Tyson’s Run is not only relatable but also a beautiful picture of the rewards of dreams, determination, and relationships when we don’t quit.

The cast includes Major Dodson as Tyson, Barkhad Abdi as Akilu, Amy Smart as Eloise, Rory Cochrane as the coach, Layla Felder at Shannon, and more. Fun side note, if you ever watched Mike and Molly, you will recognize the “mayor” of this movie, Reno Wilson. In addition, four-time Grammy Award-winning gospel singer Yolanda Adams recorded if You Believe an original song just for Tyson’s Run.

A Movie We Can All Relate To

Tyson’s longing to be accepted by his father leads him to push himself further than anyone might have thought possible. Ultimately, it is a heart-warming story of overcoming odds, changing perceptions, and of love winning.

When fifteen-year-old Tyson attends public school for the first time, his life is changed forever. While helping his father clean up after the football team, Tyson befriends champion marathon runner Aklilu. Never letting his autism hold him back, Tyson becomes determined to run his first marathon in hopes of winning his father’s approval. With the help of an unlikely friend and his parents, Tyson learns that anything is possible with faith in yourself and the courage to take the first step.

This movie had me all in the feels. The family has a child who is on the spectrum. I want it known that not all kids on the spectrum are the same. Every single child is different, and they are all capable and wonderfully made. I have two kids on the spectrum, so I believe that statement. A marriage can face struggles when having children with any issues is difficult.

“According to the documentary film “Autism Every Day,” divorce rates for families with children with autism are as high as eighty percent (80%), and for families of children with all disabilities, that number has been touted as high as eighty-five to eighty-seven percent (85-87%).” This statement is from the documentary film Autism Every Day. In our family, we have two kids on the spectrum, two kids with FASD, a child with epilepsy, a child with single-sided deafness, a child with multiple mental issues, a child with Opsoclonus Myoclonus Syndrome, and then there are all the other things. My marriage is destined to fail, according to that statistic.

This movie tackles the challenging moments between a husband and a wife just trying to do their best for their child and to set them up for success after they are gone. I get it. I mean, I get it on a personal and profound level.

Mix that in with public school and bullying, a “geriatric” pregnancy, and life…you get the struggles of this family. I also have a son from Ethiopia, so seeing the role that Barkhad Abdi plays makes my heart happy. He is a Somali-American, and he is a beautiful and talented man.

This movie must be shown in all the schools, across the board. Bullying is never good and can affect the life and well-being of those considered “less-than.” Suppose you are different than others; congratulations to you! This is not a deficit! You are capable of everything and even more, because you are so in tune with yourself and have compassion beyond compare.

To my husband, even in the hard times and the times we have tried to give up, you are my heart and my person. I am blessed to be walking down this hard road with you. Please don’t give up on me, and I won’t give up on you.

You can buy your digital copy or DVD of Tyson’s Run anytime.

Also, you can check out more information on their website.

One digital copy of Tyson’s Run. Please note: this is limited to US winners only. Many thanks to Collide Distribution for providing a sample of the product for this review. Opinions are 100% my own and NOT influenced by monetary compensation.