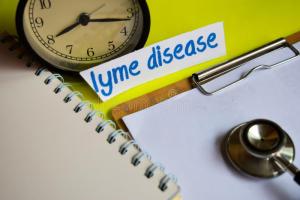 My friend, Lesley Emerson, wrote about her daughter’s Lyme Disease journey a few years ago. Soon after that, we did a series of informational posts on Lyme. After the series, Callie was brave enough to write and bear her soul on this journey of illness, healing, and faith. To ensure this story is not buried amongst other blog posts, I thought I would consolidate them all.

What is Lyme Disease

It is a corkscrew-shaped bacteria that gets all up and “screws” into place. The shape makes it incredibly hard to get rid of in the body. There is so much information on the CDC website.

I mean, look at that list above. ALS! MS! Alzheimer’s! Lupus! Bi-Polar Disorder! There are so many more. I’m so thankful for where the Lord led us.

As we followed His path, Callie was healed through non-typical methods. Step out of your box—color outside the lines. Be the patient who does not settle for a blanket diagnosis. Find the root of your illness. You can do this because you are capable and strong.

Lyme Disease is easy to diagnose and is easy to treat. You might assume that if it were a possible cause of your illness, your medical provider would have considered that before your diagnosis, and there’s no need to discuss it now.

If Lyme Disease is easy to diagnose, why isn’t it standard practice for anyone showing signs of autoimmune illness, mental illness, autism, or other related illnesses? It’s pure and simple, and nothing shows it better than this picture of Callie administering her IV antibiotics that cost us (with insurance) $700 per week.

Yes, we had insurance, but they paid for only the first 30 days of treatment. Thirty days is not nearly enough. Callie did this 3-4 times each day and would become very ill afterward. Our medical system has been taken over by greed, thus tying the hands of and misinforming our medical personnel.

I admired his conviction, but honestly, I cannot imagine risking my livelihood for someone I barely know. Please do not assume your doctors considered the possibility of Lyme before diagnosing you with something else.

Btw we found a much cheaper alternative, so don’t let that scare you.

Guess who has Lyme disease: Hereditary??

Hey! Guess Who Has Lyme Disease? ME!

By definition, the word hereditary means determined by genetic factors. Simply put, it can be passed down from generation to generation because Lyme is not correctly diagnosed (or misdiagnosed) or treated promptly. Lyme disease and co-infections are a generation-to-generation gift.

Although I’ve never been sick like Callie was, I know I am a carrier of this little gem because she had it. A tick can carry Lyme disease. However, Lyme is likely to be congenital.

Have you ever noticed that people in your family have similar health issues? Do you ever wonder why or think you are next in line for XY or Z? It doesn’t matter that you have had a negative test for Lyme.

The discouragement is real. Also, the weird and random symptoms were real. Fighting, going against the grain of society, and seeking out alternative healing methods is the key. I’m not saying that modern medicine is not something you need. It is. What I’m saying is sometimes you need more.

Lyme Disease does not travel alone. It’s important not to think chronic Lyme disease only stems from ticks. It is most often congenital and is a gift handed down from your parents.

One of the reasons it can be challenging to diagnose or be considered is because the symptoms are so broad. The signs are widespread because several co-infections go along with Lyme, and everyone has a different combo of them.

Lyme never comes alone. It always brings at least one co-infection. Your symptoms may be fatigue and pain, while another has migraines or depression. That’s because you have different co-infections.

Why are they symptom-free? Here’s how it works: God made you with a fully functioning immune system, and if we left it alone, it could handle all the gunk we inherited, plus things we are exposed to now.

Any number of things can give it a whack and make it limp a bit where it cannot fight at its full potential. When that happens, some of these fundamental things can pop up. Of course, we all know that the food we eat and all the junk we are doing to ourselves are a factor. Then other things can give your immune system a whack that’s just enough to be a trigger.

For Callie, it was an exposure to an insecticide (probably while playing soccer). Then she had her 6th-grade booster shots. That whacked her body just enough that she began having her first of many symptoms a month after having them. Because Lyme Disease does not travel alone, she not only Lyme but four other co-infections her body was battling.

I’ve heard others have been in a car wreck or gone through a divorce (any significant stress). Some had gotten a flu shot, had anesthesia or had a significant health crisis. Afterward, their symptoms began.

All of those things can affect the function of your immune system letting congenital Lyme take over. Once Lyme Disease takes over and does not travel alone, other symptoms begin to emerge.

So if your family tree looks similar to the one below, there’s probably a good reason.

ALS and Lyme Sneaky Little Bug. Lou Gehrig’s Disease is often misdiagnosed. However, the root is undiagnosed Lyme Disease. Lyme is such a sneaky little bug.

There are so many things that run comorbid with Lyme. The comorbid diagnosis is the one with the name, when Lyme gets away, undetected. Again, have your doctor do testing through Igenex. That is the key. Please, advocate for yourself if something seems off.

Sadly, it is the beast that is Lyme Disease.

This disease is horrible. A cure needs to be found. It saddens me that one little thing can cause and wreak so much havoc. So often, it is misdiagnosed, and people suffer. Needlessly. I mean, I had Lyme show up because my mom had it. We have to advocate for ourselves and our health. No one else will do it because only you know you.

For more on ALS, please check out The ALS Association.

Where does it hurt?

So, where does it hurt? Your joints, your head, your fingertips, your back? Why are there so many symptoms of Lyme disease?

The bacteria is corkscrew-shaped and can bore into any tissue or organ in your body. How scary is that? It makes me think of something that bores into my skin or organs.

Some people have neurological issues because it is predominantly in their brain, some in their digestive tract or back, or anywhere from the top of your head to the bottom of your toes, making it difficult to diagnose just based on symptoms alone.

Testing is super easy with the Western blot test from Igenex Labs!

When your body is hurting, it is time to enlist the big guns at Igenex Labs! Igenex is the lab that has the most accurate test results. Other tests may come back as a false negative. You want to be accurate in determining whether or not you have Lyme Disease. Please be wise. Ask questions. Be an advocate for yourself. It can be challenging and intimidating, but you are your only advocate. Be loud and be heard.

Insomnia, or as Callie used to call it, Lymsomnia, is a prevalent symptom of Lyme disease.

Before treatment, insomnia kept Callie up all night, anywhere from 2-4 nights per week.

That fact adds up over several years. Erik and I took turns sitting with her so she didn’t feel alone. Sadly, this is why we have so many wrinkles, haha! Insomnia is so hard to handle. Losing sleep, restless sleep, or interrupted sleep can cause many other issues. It is a never-ending cycle. Maybe the term “Lymsomnia” should be in the dictionary.

Some signs that you may be struggling with sleep deprivation are memory issues and critical thinking skills. There can be mood changes, high blood pressure issues, weakened immune systems, etc. Most people blindly accept what diagnosis they are given. Then, they do as the instructions say on the bottle. But. What if it is more.

If you are reading this and these things sound familiar, do not ask your doctor for a Lyme test. A Lyme test will likely come back negative. A negative test is one of the reasons so many people are slipping through the cracks. Also, not getting a proper diagnosis. The test most doctors use is entirely ineffective. There is one test and only one reliable lab in the country. Igenex Labs.

Crohn’s IBS Colitis Behcets Most of the “Lymies” I know have been told they have IBS.

IBS is “a common disorder that affects the large intestine. Signs and symptoms include cramping, abdominal pain, bloating, gas, diarrhea or constipation, or both. IBS is a chronic condition you’ll need to manage long term.”

Colitis Symptoms is “a chronic digestive disease characterized by inflammation of the inner lining of the colon. Infection, loss of blood supply in the colon, Inflammatory Bowel Disease (IBD) and invasion of the colon wall with collagen or lymphocytic white blood cells are all possible causes of an inflamed colon.”

Behcet’s Symptoms are “a rare disorder that causes blood vessel inflammation throughout your body. The disease can lead to numerous signs and symptoms that can seem unrelated at first. They can include mouth sores, eye inflammation, skin rashes and lesions, and genital sores.”

It’s on my list of medical things that have popped up. However, we’ve given it a name. Surprisingly, we did not check to find a root cause. For example, with Lyme, any muscle in your body can spasm. Also, tummy troubles and Lyme go hand in hand.

Please, be aware, ask questions, do not take NO for an answer, and advocate. You are an expert on your body, do not let anyone tell you any different.