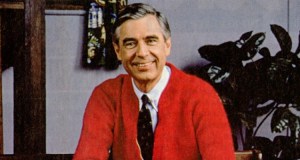 Here is some Perspective from Mr. Rogers from Mr. Roger’s Neighborhood.  This is what to do when you overreact and have regret.  “Many people have asked me do you ever get mad and of course I answer “well yes, everyone gets mad sometimes.”  The important thing is what we do with the mad that we feel in life.

Do Not Squirt Me

He did as I told him and said he was sorry and looked very sad.  The more I thought about it, the sadder I got.  I realized Alexander had not squirted me.  That I had stepped into his and his brother’s playtime with a lot of feelings leftover from work.

So when I got home, I called Alexander, on the phone.  I told him I felt awful about my visit with him. The more I thought about it, the more I realized that I was taking out my anger from work on him.  I told him I was really sorry.

Do you know how he answered me?  Oh, Baba, everybody makes mistakes sometimes.  I nearly cried.  I was so touched by his naturally generous heart.  I realized that if I hadn’t called him, I might not have ever received that wonderful gift of Alexander’s sweet forgiveness.”