A Letter to Myself

My guest blogger wants to step back in time and parent that child who was abused and never truly parented.  She wants that little girl to know that what is happening is wrong and that she is not at fault.  What a beautiful way to begin the healing process. 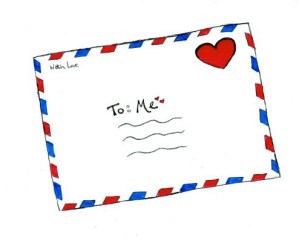 I have written numerous letters to others who have significantly hurt me, but I have yet to write a letter to the person I feel has hurt me the most.

That person is me.

For years I have “punished” myself for things that were not my fault. It has been hard to remember that when bad things were happening to me, I was between the ages of 7 and 11. I have blamed myself for years for the people around me dying. I have blamed myself for not being there for them while they die. Like, for goodness sake, Sarah, you were like 9. It is not your responsibility to take care of people who are dying.

When my dad divorced for a second time, we had just moved, and we were tight on money. It is not that my dad was not making enough. It was because he gave his ex-wife a good chunk of his money. So, I started skipping meals to ensure everyone had enough to eat. When I ate, my brother would comment on my weight or how much I was eating. I stopped eating for weeks and started working six days a week.

After over a year of doing that

I finally realized that it wasn’t my responsibility to ensure everyone ate. It was my father’s, and he was incredibly absent then. So I slowly started eating again. I have better eating habits now, but I still have days when I feel I shouldn’t be eating. To this day, if I have to get weighed, I can’t look at the scale because If I see what it says, I will spiral.

Around that same time, my dad was incredibly absent. All of the cooking, cleaning, and children became my responsibility. I was the parent in the household. I juggled all of my duties at home, schoolwork, and band.

The only thing I remember from this period of my life is being incredibly exhausted. It was at this time sister would hardly sleep. And she became violent. So I would wake up at three in the morning to her punching me in the face or pulling my hair. I remember the countless morning of me just crying because I was so tired and in pain.

That was a super dark time in my life.

This was the beginning of a super dark time for me. I had zero will to live. I didn’t care what happened to me. Honestly, I wish this part of my story had a happier ending, but I’m still learning that Madison isn’t my child or my responsibility.

I feel guilty when I go out while she’s at the house. Also, I feel anxious that something terrible will happen to her while I am gone. I feel like I have been better about leaving her home, so that is a step in the right direction.

Then, I guess the last piece of this story is about the shooting. I remember that morning going into the band room with my friends. I stood across the room from him and just stared at him. The atmosphere that morning felt off.