Suicide Deaths in the United States

These are some powerful visuals from the Suicide Prevention Resource Center.  The statistics are based on Suicide Deaths in the United States.  Please, stop and take a look.  More people have suicidal ideations than you think.  Sadly, some of these people may be your family or friends. 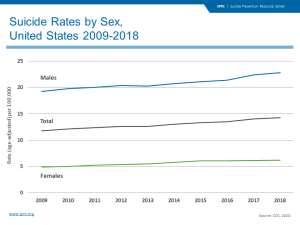 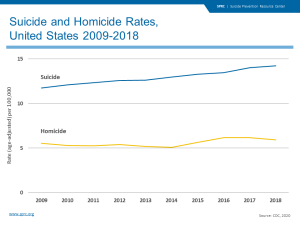 The homicide rate has not consistently shown the upward trend that we see with the suicide rate.

Suicide rates are generally highest in Alaska and in the western and northwestern United States, with the exception of southern California and parts of Washington. Rural counties generally have higher rates of suicide than urban counties.